Written by Ionut Vornicu on 30 November -0001. Posted in Leaders from Turkey 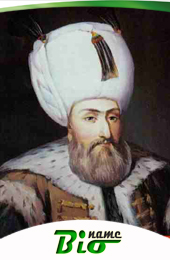 1494 Suleiman I was born on the 6th of November at Trabzon, Ottoman Empire (Turkey today). He was the greatest Ottoman Sultan. Under his reign the Empire expanded from Baghdad to Central Europe. The civilisation also developed a lot: law, literature, arts and architecture reached new levels. He was son of Sultan Selim I and of a slave.

1520 Suleiman took over the power, achieved experience as governor of a province before succeeding his father. He inherited a very well trained army that he used with maximum efficiency during all his reign. He led Ottoman armies deep into Europe.

1521 Belgrade was besieged and Hungarian army was defeated during Mohacs battle in 1526 after Suleiman had crossed Drava River on a ship bridge that he had burned after that. Suleiman’s army invaded Hungary many times during his reign, mainly to settle dynastic rivalries in conquered territories.

1529 Suleiman poorly besieged Vienna, Eastern capital of his opponent, Charles V of Habsburg. In the end, Suleiman succeeded to make this pay tribute and moreover, to force France to sign an agnation with the Ottoman Empire. He made Ottoman Turks take over control in Europe.

Suleiman led three important campaigns in Persia and conquered Iraq, achieving the great Muslim city of Baghdad for his empire. During Suleiman’s reign Ottoman Turks became the greatest power of Mediterranean basin. From the beginning of his reign, he conquered Rhodes Island from Ioanit knights but he soon realized that he needed a fleet in order to implement his ambitious plans. So he founded a fleet being helped by Algerian corsairs led by Kahyr ad-Din, known in West as Barbarosa.

1530 Suleiman’s Royal Court was famous for its splendour and for complex Oriental rituals that took place here. Throne room, golden and embellished with gemstones impressed a lot the visitors. Magnificent public ceremonies, organized on the occasion of their sons’ circumcision, lasted no less than 55 days. Poetry also flourished during his reign. Many laws were issued, fact that made Suleiman be called “Forger of Laws”. That period was a Golden Age from all points of view.

1534 He became admiral of Ottoman Empire.

1538 Ottoman fleet defeated allied fleets of Venice and of Spain and contributed to Ottoman Empire’s expand almost within all Northern Africa.

Internally, Suleiman appointed many great and skilful governors and employed architects who embellished Constantinople and other cities, for example Baghdad, with mosques, bridges and aqueducts.

Suleiman was a very prolific poet, author of no less than 2000 ghazals, short poems, the majority were dedicated to his wife, Hurrem, born in Poland of nowadays who he was devoted and faithful. She was the real power of the palace.

One of the lyrics of a poem for her: “My garden’s green, my sweetheart, my treasure, my love”. Baqi, poets’ sultan, was Suleiman’s favourite.

1566 Suleiman died on his 30th campaign, the seventh in Hungary while he was besieging a Hungarian fortress, Szigetvar.[1]