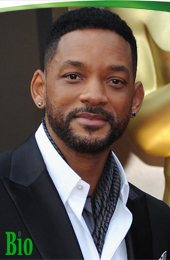 1968 On September 25th  Willard Christopher Smith Jr. is born, in Philadelphia, USA. Later known as Will Smith, he is a famous actor, rapper and music producer.

1984 The young Will Smith meets Jeff Townes, with whom he co-founds The Fresh Prince band.

1986 The band releases its first hit, Girls Ain't Nothing But Trouble.

1990 At less than 20 years Smith becomes millionaire with the success of the album  Rock the House. In the same year he makes his start in acting by getting one of the main parts in the Fresh Prince Of Bel-Air tv series.

1993 Smith gets a more deep role in Six Degrees of Separation.

1995 The actor stars in Bad Boys, movie in which he plays among Martin Lawrence. The movie is one of the first to portray a team of black police officers.

1997 The movie Men in Black is released, having a huge success on the audience. In the same year the actor marries actress Jada Pinkett, with whom he has two kids. Smith also has a child from a previous relationship.

1999 The Wild Wild West movie gets the same audience success.

2001 Smith stars in Ali, the biographical movie about Muhammad Ali. The role gets him critics appreciation and the first Oscar nomination for best actor.

2006 The role in the biographical drama The Pursuit of Happyness in which he stars among his son Jaden brings him a new Oscar nomination.

2012 Smith goes back to Men in Black, playing in the third sequel of the movie.

2013 The actor plays for the second time among his son Jaden in the science fiction movie After Earth.