Written by Ionut Vornicu on 25 October 2016. Posted in Actors from Austria 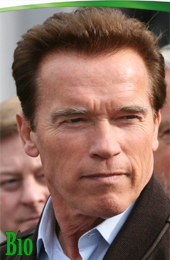 1947 On the 30th of July Arnold Alois Schwarzenegger was born at Thal, Steiermark, Austria. He is a world champion in bodybuilding, an actor at Hollywood, a Republican politician who was the 38th governor of American state California. His father, Gustav Schwarzenegger, worked as an officer for the local police and his mother, Aurelia Jadrny was a housewife. According to Schwarzenegger’s words his parents were harsh: “Austria was a different world in those years. If we had done something bad or we had not obeyed our parents, the rod knew about us”. He grew up within a faithful Roman Catholics family who witnessed the religious ceremony every Sunday.

1960 He got the first dumbbell when his football trainer went with the team to a local gym.

1961 Being 14 years old, Schwarzenegger chose bodybuilding as his sports career and left football. Schwarzenegger: “I started the weight training when I was 15 year-olds but I had been also practicing football for four years. Even if I was thin I was bonny so that I could go to gym and to lift weights to competitions”.

1968 Paying attention to Hollywood, this year Arnold immigrated to the USA where he got for five times the title of world champion in bodybuilding (Mr. Universe) and seven Mr. Olimpia titles, giving up to this career for acting. He was given American citizenship.

1970 As Arnold Strong, he appeared in his first movie, “Hercules in New York” and became quickly very known among actors from Hollywood.

1977 Foreign Press Association from Hollywood offered him Golden Globe for The New Male Star of the Year for his role in “Stay Hungry”.

1984 This year Arnold joined cinema history with the role from SF thriller of American film director James Cameron, “Terminator”. The movie was very successful and Arnold treatened to come back: “I’ll be back!”, expression that become popular worldwide in a short time. He kept his promise and returned with the second movie: “Terminator 2: Judgement Day” (1991) also under James Cameron’s directing. The series was completed in 2003 with “Terminator 3: Rise of the Machines” this time under Jonathan Mostow’s directing.

2003 On the 7th of October Arnold was elected governor of American State California going on Gray Davis’ term until 8th of January 2007.

2006 On the 6th of September he announced he would be a candidate again for being a governor.

2007 He was elected again governor of California, job that finished on the 3rd of January 2011 and he was not eligible for a new term.

2011 The news that he has another child with a former employee made Arnold’s wife break out their relation and divorced.