Written by Ionut Vornicu on 25 October 2016. Posted in Actors from England (UK) 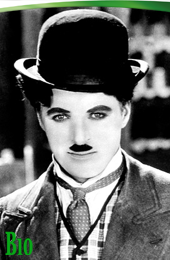 1889 On the 16th of April Charles Spencer Chaplin was born in London, Great Britain. He was one of the biggest names in the history of the cinema, being mostly known as Charlie Chaplin.

1914 The actor made his movie start by receiving a role in the american production Make a Living.

1915  The actor signed a contract with the movie production company Essanay, which would bring him fame. In the same year he starts playing the famous role of the tramp, that became one of his trademarks.

1916  Charlie signed with his second movie production company, the Mutual Company. This collaboration brought him some his most important roles of his career, such as the ones in 1 A.M, The Rink or The Vagabond.

1921  The movie The Kid was released, yet another big success for Chaplin.

1925  Charlie starred in Gold Rush, movie that he declared to be the one he wanted to be remembered for.

1931  The movie City Lights was released, setting selling records for that time.

1940  Chaplin played his iconic roles in The Dictator, movie in which he mocked Hitler’s and Mussolini’s regimes.

1943  The actor married Oona O'Neill, with whom he had a happy marriage and eight children.

1967 The actor played in his first and only colored movie, which is also the last movie he ever played in. The movie was called A Countess from Hong Kong.

1972  Charilie Chaplin got an Academy Award prize for his entire career.

1975  The Queen of England knighted him for his services to acting.

1977  On the 25th of December the actor died in his home in Switzerland.

Written by Maria-Cristina Rusu on 16 November 2016. Posted in Actors from New Zealand

1964 On the 7th of April Russell Ira Crowe is born in Wellington, New Zealand. Russel Crowe is a very appreciated actor of the last decades.

1968 The Crowe family moves to Australia, where they work in catering. The parents manage to get roles for little Russel in different tv shows they deliver food to on set.

1978 Russel goes back to New Zealand and starts playing in a rock band.

1983 Young Crowe starts his acting career with a role in an adaptation on the Grease musical.

1986 Crowe gets a role in The Rocky Horror Picture Show, a theater show with which he goes touring.

1990 The actor makes his big screen start with the movie Blood Oath. The same year he also gets his first main role, in the movie The Crossing.

1991 Crowe plays among Anthony Hopkins in The Efficiency Expert.

1992 The role in the movie Proof gets him a first AFI (Australian Film Institute Award) for beste supporting actor.

1993 Crowe receives his second AFI, this time for best actor in a leading role, for the movie Romper Stomper.

1995 The movie The Quick and the Dead is launched, a western in which Crowe plays among Sharon Stone and Leonardo DiCaprio.

1997 Russel becomes truly famous in the USA for his role in L.A. Confidential.

1999 The movie The Insider is launched, in which Russel plays among Al Pacino. The role brings him an Academy Award nomination.